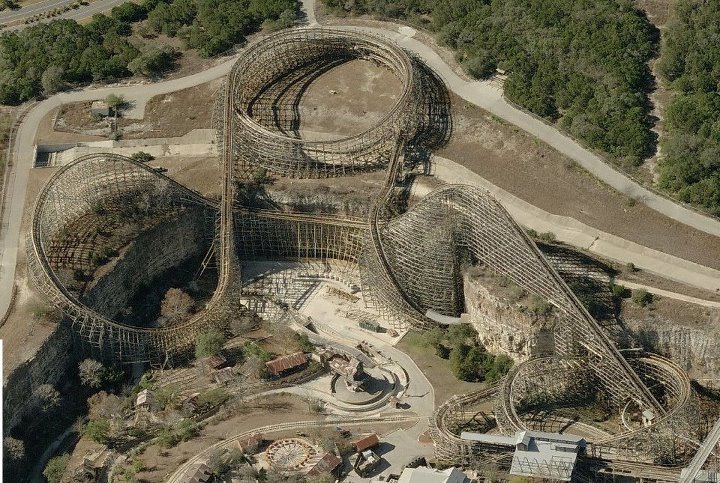 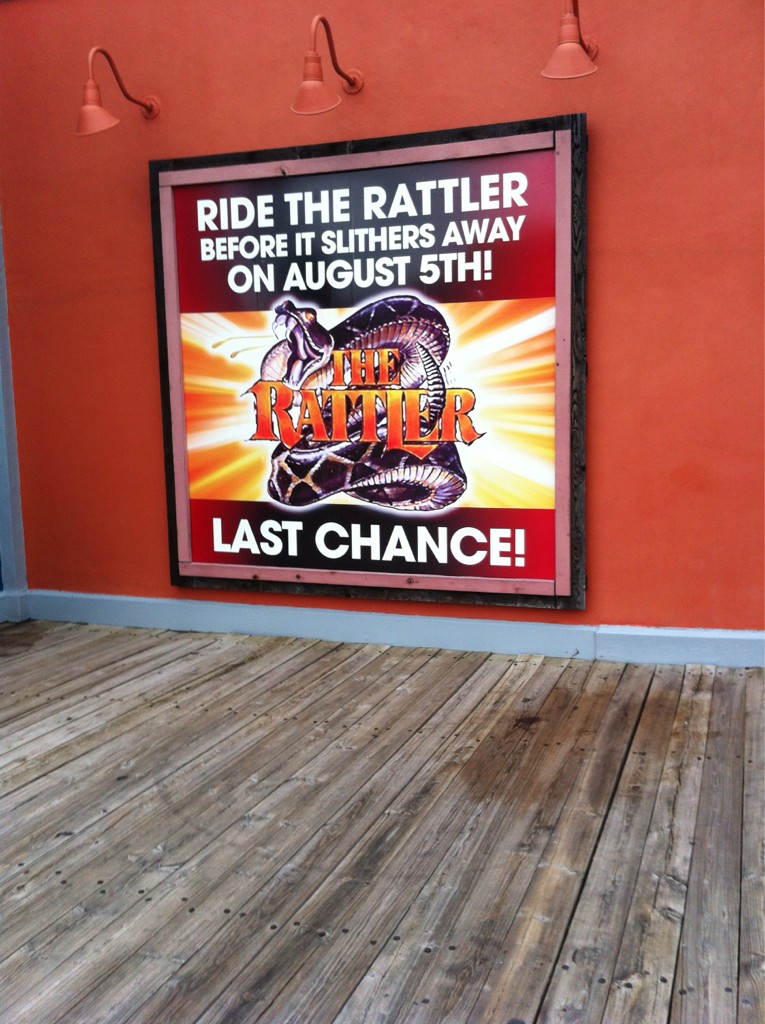 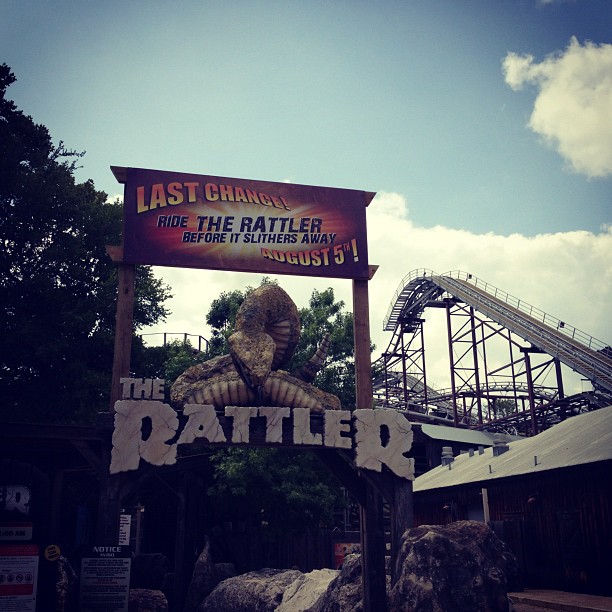 Rattler ends its run after 20 years

The Rattler, a giant wooden roller coaster and Six Flags Fiesta Texas landmark, shook, rattled and rolled into the memory of millions of thrill-seekers with a final run Sunday night.
Some have predicted the massive 20-year-old serpentine amusement ride will simply shed its skin and return with new steel rails and other upgrades. Officials of the park had said it would be “going away,” and that the “last opportunity to ride the Rattler before it slithers away” was Sunday. They have not said what, if anything, will replace it.
The commemorative final run closed out the last weekend for guests to climb aboard the ride, which has been cherished by those who relish high-speed drops and feared by those who don't.
An eerie hush had fallen over the park after closing time Sunday night as the last group of riders boarded the Rattler for the last time. Roller coaster devotees, police, firefighters and park employees were among those who took the final ride.
“One last time,” said Tim Baldwin, editor of RollerCoaster! Magazine, who was seated in the front row of the first car. At 10:05 p.m., the train pulled into the station for the last time. A loud pop was followed by a cloud of colorful confetti that fell upon the riders.
Baldwin said it marked the end of an era.
“It's a ride to tell your grandkids about,” he said. “When it was first built, it was undeniably the best first drop,” he said. “It had people flocking here from all over the country.”
Albert Alcala, a San Antonian who says he has ridden the Rattler more than 5,000 times, also was on the final run. He said it was “kind of sad,” to know the ride no longer would be around.
“Wooden roller coasters have always been unique,” he said. “Because of the give of the wood frame, every time you get a different ride.”
Ron Kuehnle of Friendswood was among the visitors who got in a last spin during the Rattler's final weekend.
“I hoped to get on it before it closed, so this was perfect timing,” Kuehnle said Friday.
He said the ride reminded him of the Texas Cyclone, a white wooden coaster at Six Flags AstroWorld, which closed in 2005.
“It was neat. You not only got super thrills, but added movement with the wood. It's old-school 3-D fun,” Kuehnle said.
The Rattler was one of 15 rides at the 200-acre musical theme park when it opened in 1992. The park was built in an old quarry by La Cantera Development, a USAA subsidiary, and Gaylord Entertainment.
The Rattler, with a framework made of Douglas fir and southern yellow pine, was initially billed as the world's tallest, fastest wooden roller coaster. It was modified in 1994, with reconfigurations and reductions in speed, after some patrons reported injuries and said it was too jarring.
Since it became part of the Six Flags chain in 1996, Fiesta Texas has added more rides and a water park. It now lists about 50 rides on its website, with Goliath, Poltergeist and Superman/Krypton Coaster among its most thrilling roller coasters.
In January, the Spokane Journal of Business reported that Rocky Mountain Construction has a contract to build a wooden coaster with a high-performance track system and cars at the park. The Idaho firm collaborated on renovation of the wooden Texas Giant coaster at Six Flags Over Texas in Arlington, resulting in what park officials call a “hybrid” design with all-steel rails and wheels. Both parks are run by Six Flags Entertainment Corp.

After 19 years of operation, the Texas Giant closed at the end of the 2009 season in Arlington, then reopened in the spring of 2011 with new tracks, steeper drops, reshaped curves and new modern trains with contoured padded seating.
The Arlington park announced last week that it is closing two older rides. The Texas Chute Out, a parachute-drop attraction that opened at the Arlington park in 1976, and Flashback, a steel coaster that has operated since 1989, will be open through Labor Day.
Six Flags officials have said the Flashback has provided rides to 17 million guests.
Zum Vergrößern anklicken.... 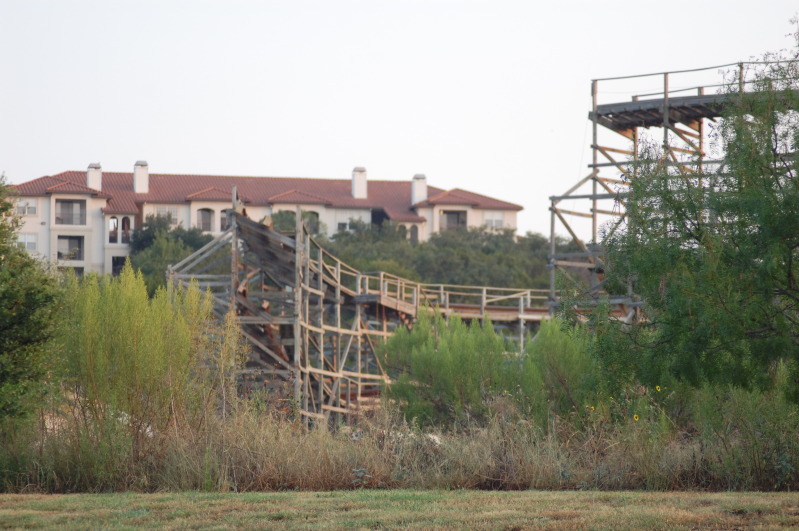 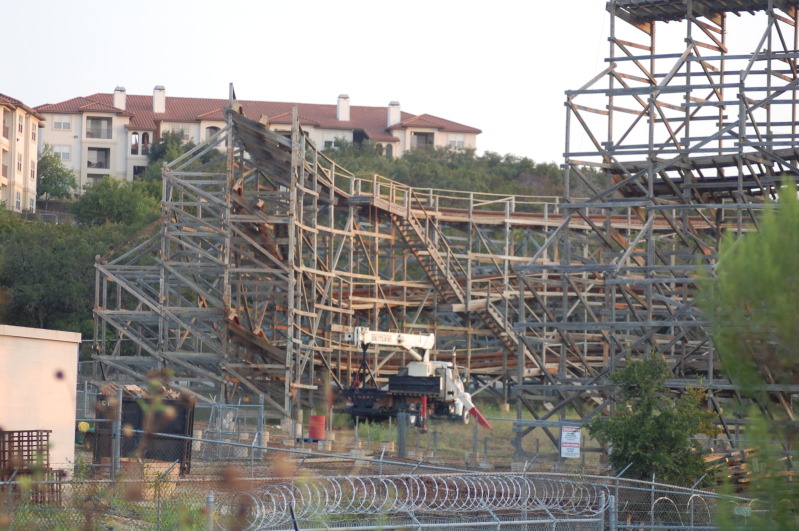 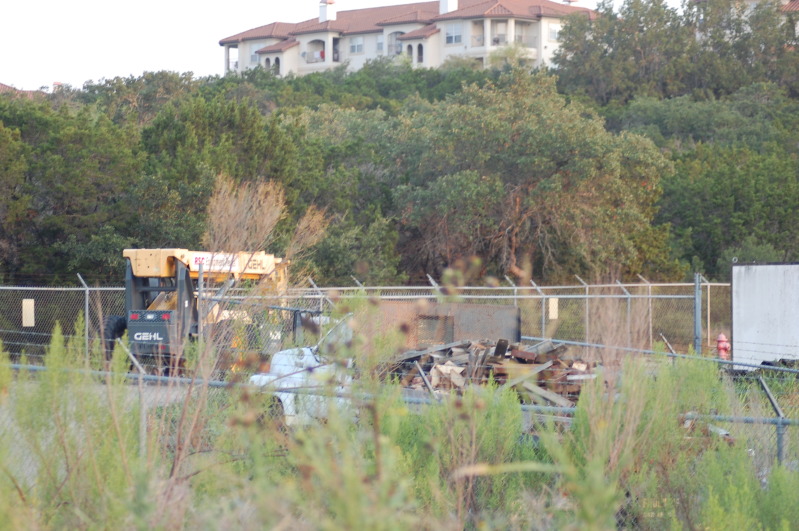 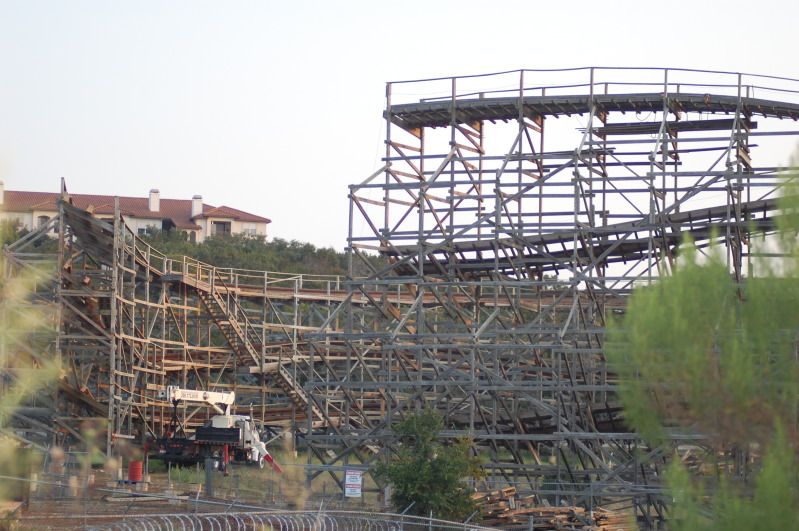 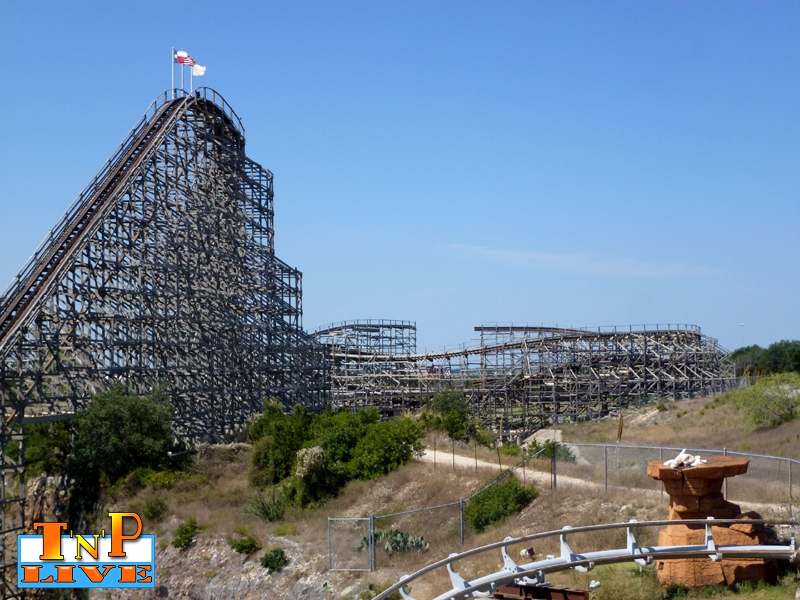 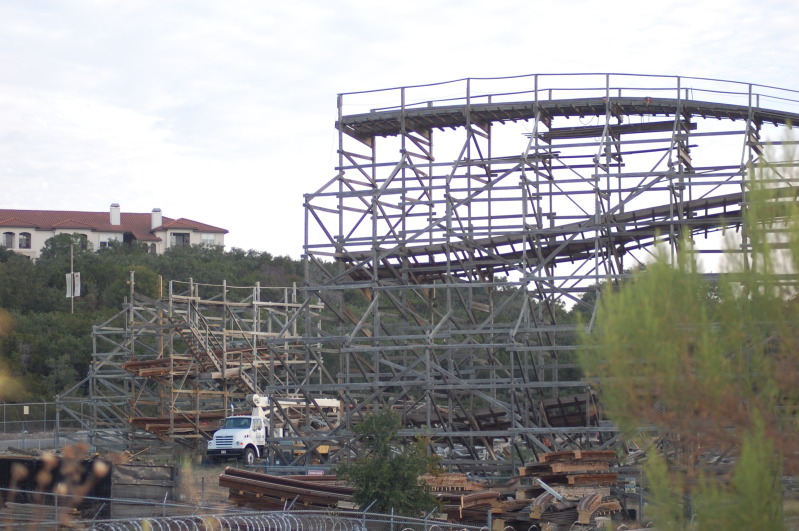 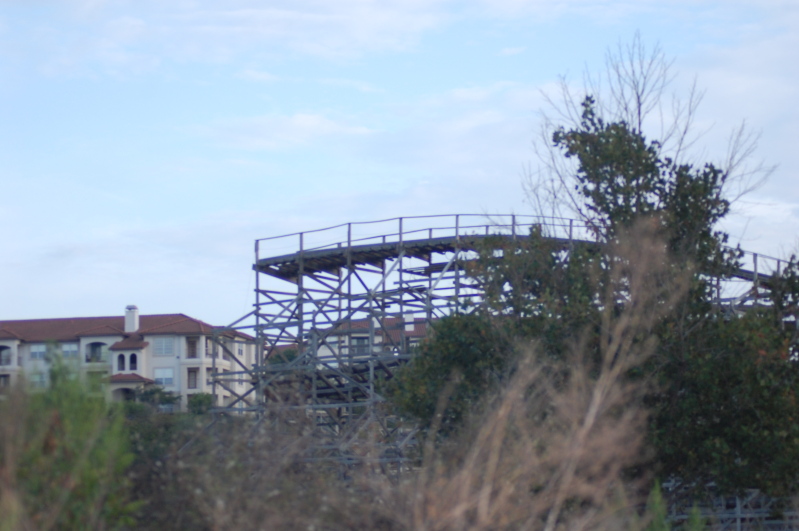 The latest rumors sent my way claim that Rattler will be reborn as “Iron Rattler”. While we’ve seen the park already begin the process of removing the painful triple helix from the top of the cliff, now the first rumors about the new features are starting to trickle in. For starters... how does a barrel roll inversion sound to you? Good I hope, because Rattler is going to have one in 2013. Look for the coaster to also feature new trains from Gerstlauer, very similar to the ones on the Texas Giant, but with their own wicked reptile theme of course. More to come... but I’m already getting very excited about this one.
Zum Vergrößern anklicken.... 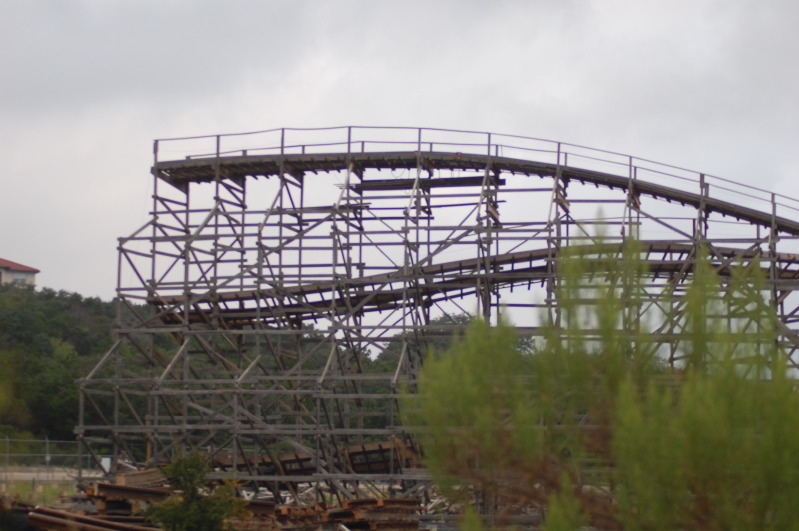 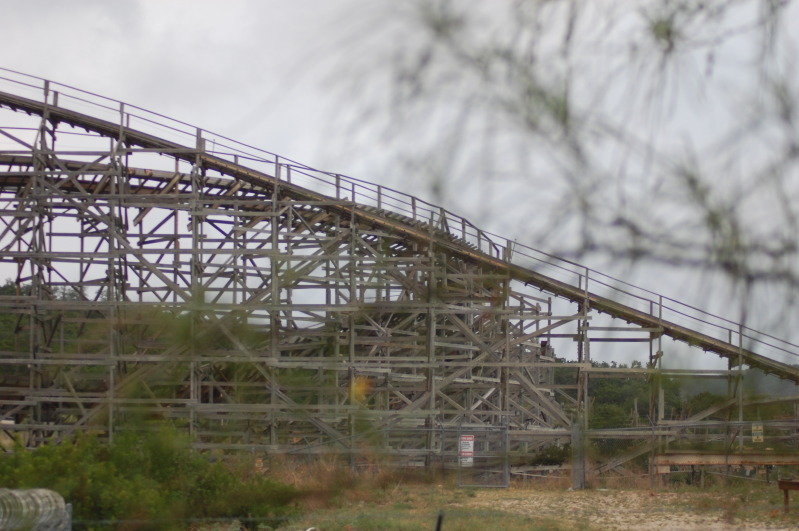 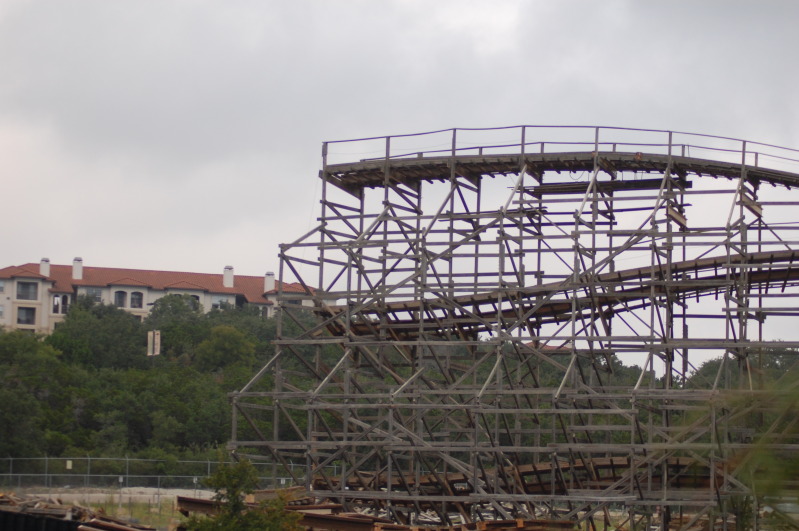 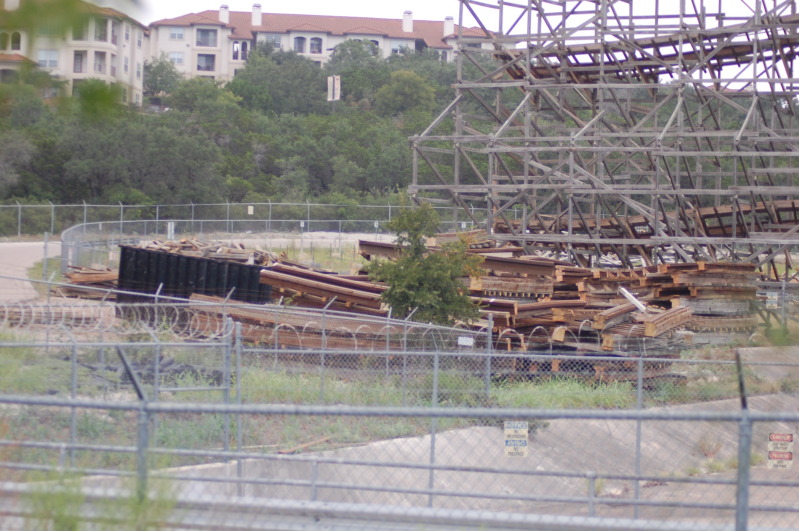 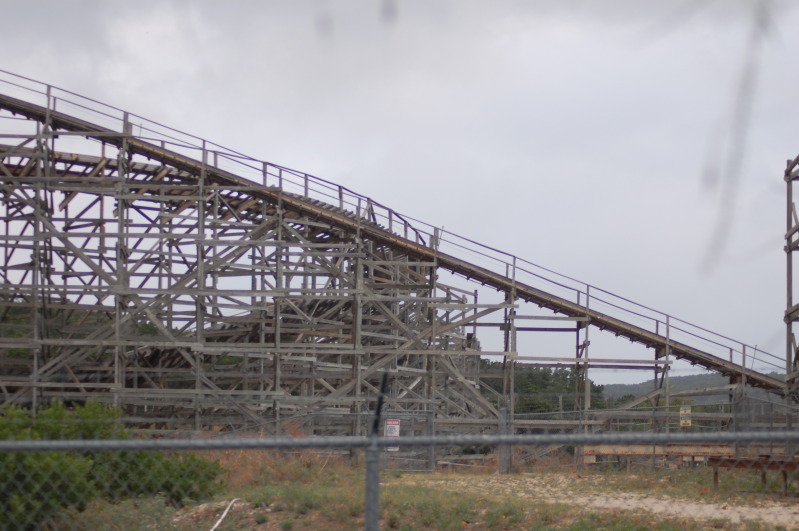