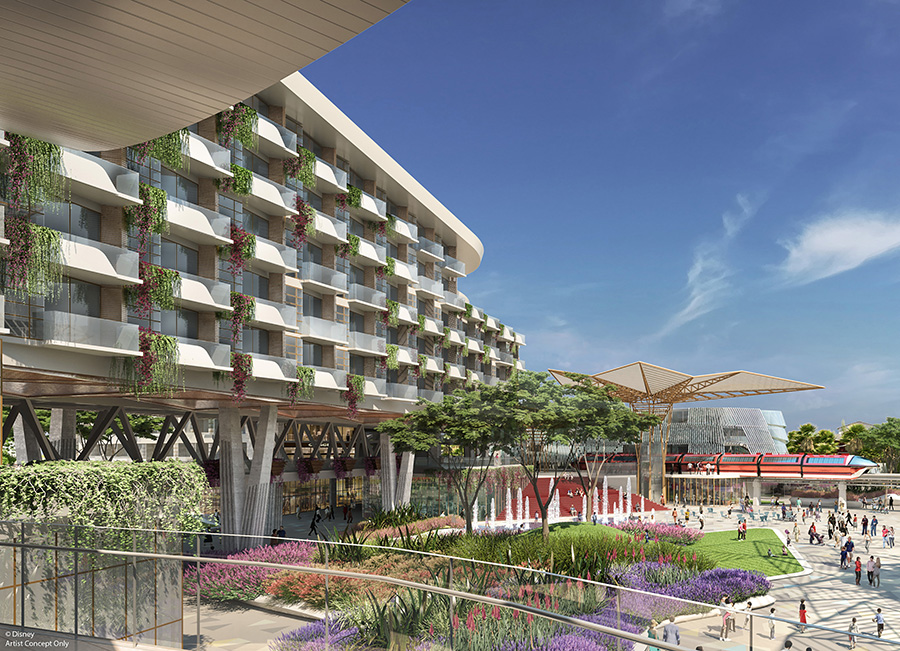 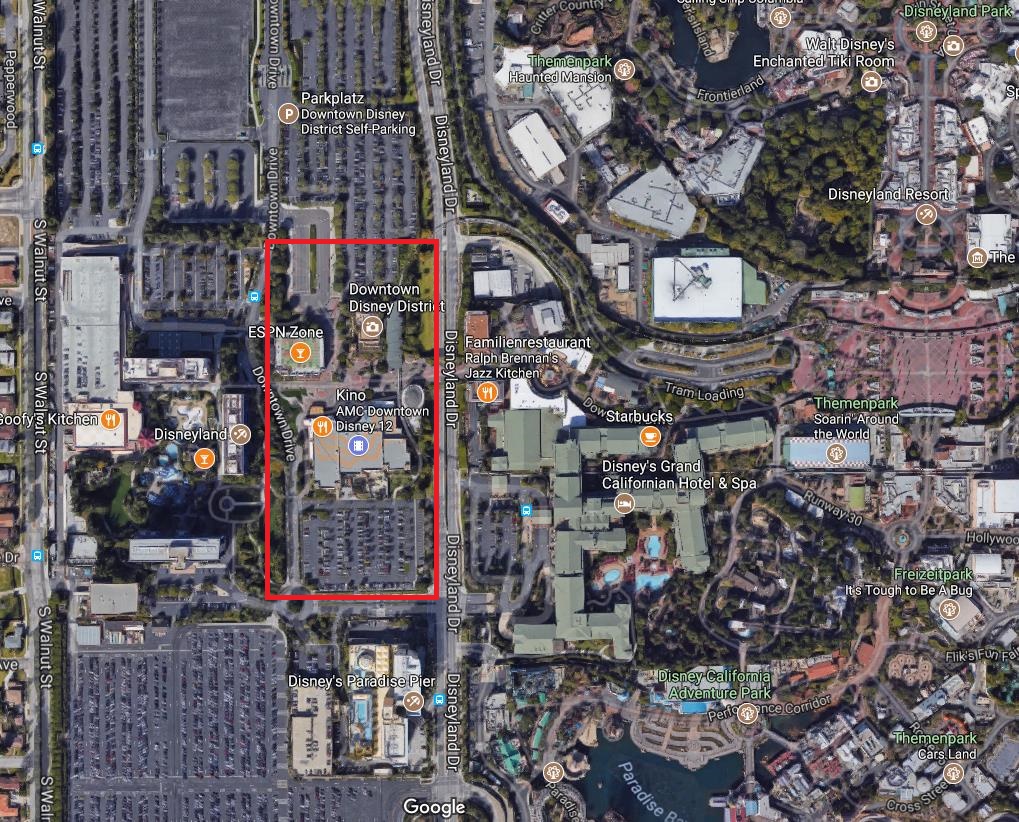 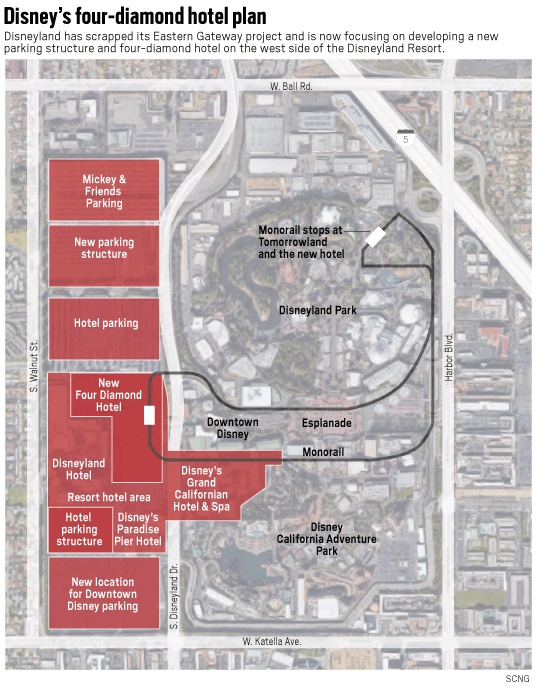 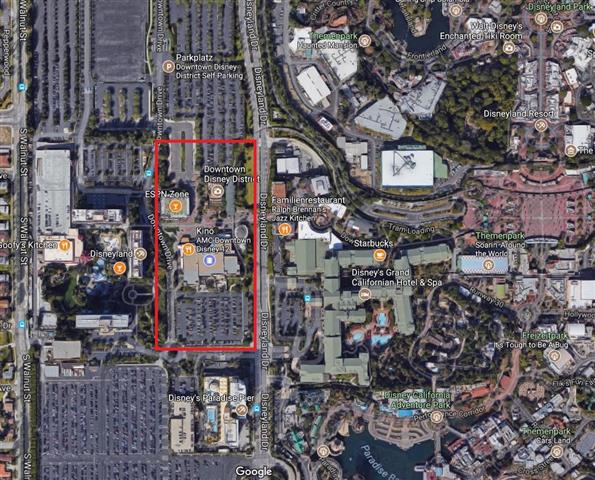 Several businesses that have anchored Anaheim’s Downtown Disney since it opened in 2001 will be demolished this summer, including the popular ESPN Zone, Rainforest Cafe and AMC 12 Theatres, to make room for a new 700-room hotel that will expand lodging at the Disneyland Resort.

This is the largest renovation of the major shopping-and-entertainment district, which was created to accompany the expansion of Disneyland with a second theme park and the new Grand Californian hotel. The announcement marks a turning point as the destination moves from its former emphasis on attracting local residents to courting out-of-town visitors willing to spend money on a four-diamond hotel, experts said.

Disney officials announced that the businesses would close by June 30, with demolition slated to begin in early July to clear the site for the new and as-yet-unnamed hotel, which will occupy 17 acres. It’s unknown at this point if any of the closed businesses will reopen elsewhere in Anaheim, though talks are ongoing about one or more reopening inside the new hotel complex.

Here’s what is being demolished:
- AMC 12 Theatres
- Rainforest Cafe
- ESPN Zone
- Earl of Sandwich
- Alamo Rent-a-Car
- Starbucks (only the west side location)
- Two Disney businesses – Disney Vacation Club and Walt Disney Travel – will continue to operate in other resort locations.

Essentially, everything on the Downtown Disney property west of the Lego store and Disneyland Drive will be demolished, until the boundary of the Disneyland Hotel is reached.

Employees of the businesses were being notified of the impending closures on Tuesday, officials said.

Gavin Doyle, author of “Disneyland Secrets,” said he was glad they weren’t waiting until the end of the summer to begin demolition.

“People seem to be the most sad about losing the Earl of Sandwich (quick service restaurant), because it’s probably the least expensive and best tasting meal in Downtown Disney,” Doyle said.

Although all the businesses are expected to close by June 30, some may close earlier, officials said. No date for the start of demolition has yet been set. Disney has yet to receive expected final approvals from the city of Anaheim for the new hotel, which is slated to include a monorail stop and a new restaurant-lounge that offers viewing of the Disneyland fireworks.

Some 200 employees at the Disney-owned ESPN Zone sports bar will be offered bonuses starting at $500 if they remain on the job until the June closing date, and will also be offered severance packages and the chance to seek other jobs at the resort, Disney spokeswoman Suzi Brown said.

“We appreciate their contributions and we’re working with them individually to explore opportunities at this resort,” Brown said.

Building a new hotel on the popular Disneyland Resort entertainment zone adjacent to the theme parks is “a no-brainer,” said David Koenig, unofficial Disneyland historian and author of “Mouse Tales.”

“Everything they’ve built ‘inside the magic’ (entertainment area) is a guaranteed hit,” Koenig said. “If they could start opening up hotel rooms inside the (Disneyland Sleeping Beauty) castle, they’d do it.”

Doyle said it makes sense for the AMC 12 Theatres to close, as the emphasis shifts from attracting local users to out-of-towners who spend money in hotels and on food.

“A movie theater in general is just not anyone’s priority of top things to do at Disneyland,” Doyle said. “It’s smart for them to get rid of it.”

A spokeswoman for the Downtown Disney location of the Rainforest Cafe chain was not immediately able to comment.

The Earl of Sandwich shop opened in 2012 and has been a hit ever since, spokeswoman Amy Sadowsky said. She declined to comment on speculation that a new hotel might contain an Earl of Sandwich location when it opens, slated for three years from now.

“We’re sad this is happening, but it’s progress,” Sadowsky said. “It’s a great new development that Disney is building.”

Sadowsky said that the Earl of Sandwich plans to operate until the June 30 deadline, and its 69 employees will have the chance to be considered for jobs at Buca di Beppo, which is also owned by parent company Planet Hollywood International.

“We’re hoping to keep people by encouraging them with pay,” Sadowsky said.

Two job fairs are scheduled, including a Disneyland Resort Culinary Job Fair on April 16 at the Grand Californian and a Resort area job fair on May 3 at the Disneyland Pacific Hotel. They are open to the public.
Zum Vergrößern anklicken....

For Disney, that meant an estimated $267 million to help finance the project.

But, the tax agreement became a sore point for some city leaders and a political talking point for unions representing Disneyland Resort workers, who have campaigned for months for higher wages.

The unions tied the tax incentives to a wage increase measure that voters will decide on in November. Disney went to the city and tore up the deals that would have required it to raise pay – first to $15 an hour and ultimately to $18 – if the ballot measure is approved.

In the meantime, it has inked contracts with many of its workers, getting most to at least a $15 hourly wage.
Wincome, which also put a hotel on hold in light of the ballot measure, won’t make a final decision until after the election, said consultant Jeff Flint, who represents the company.
Zum Vergrößern anklicken.... 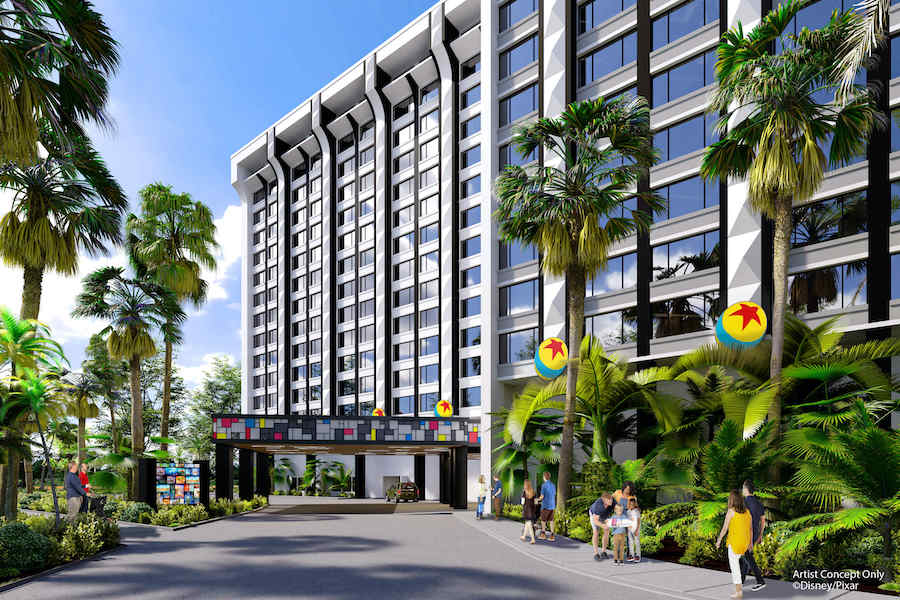 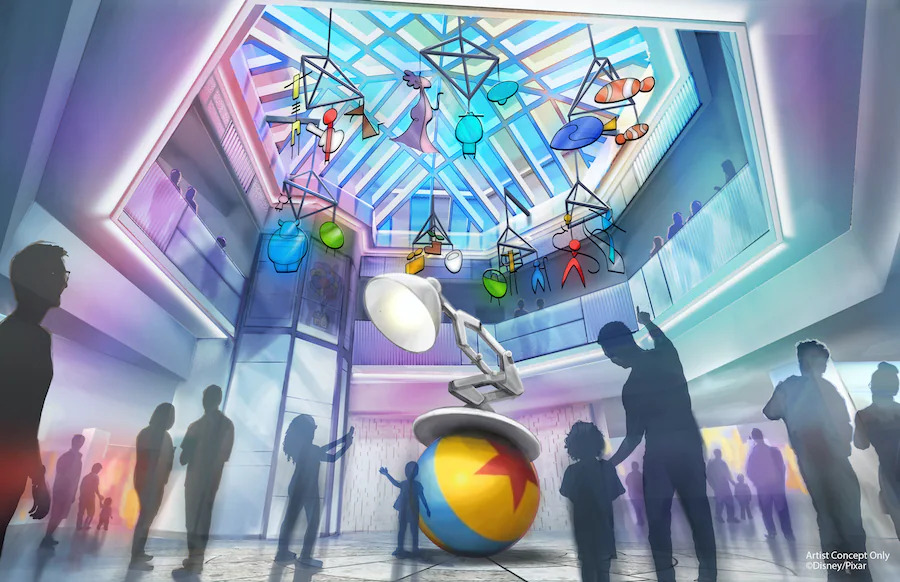 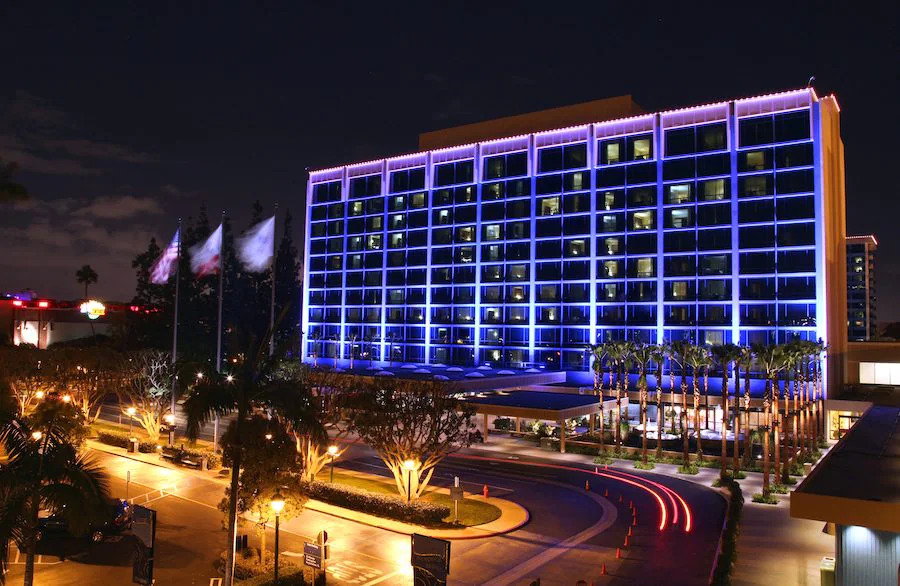 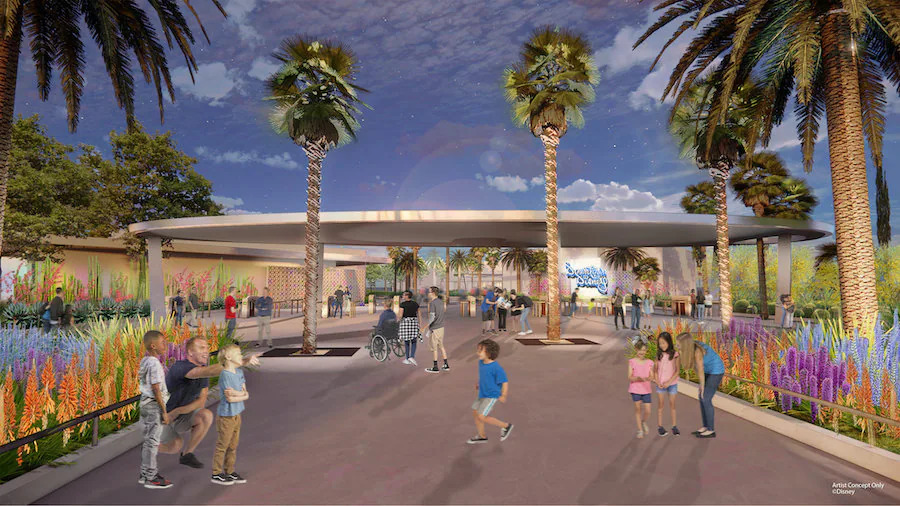 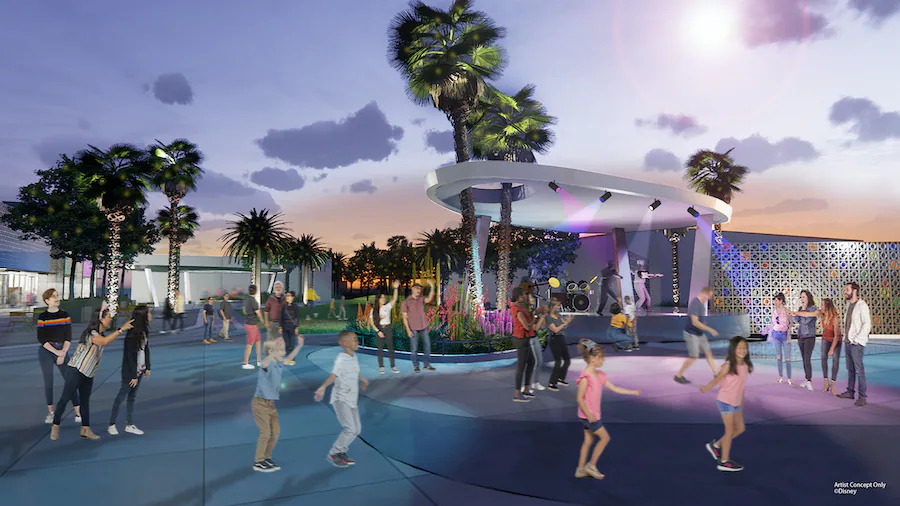 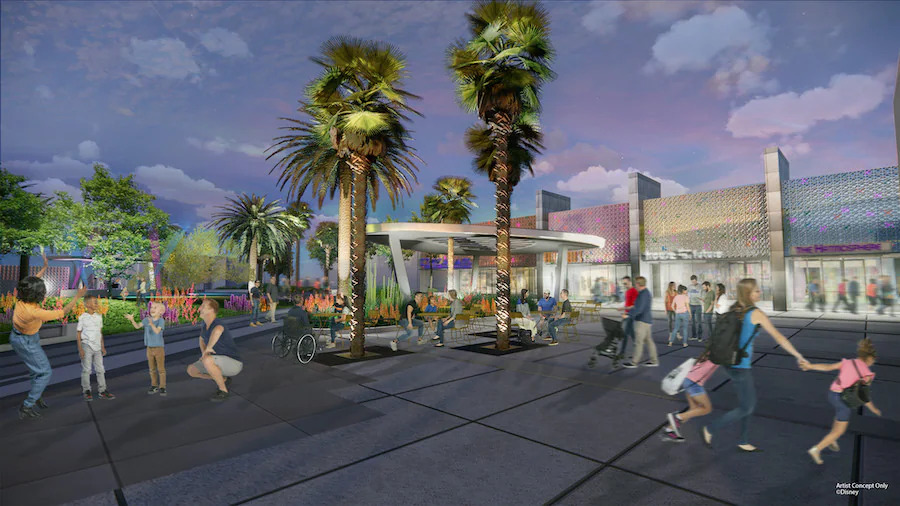 We also are happy to share another new look at the exciting shopping and dining coming to the west side of the Downtown Disney District. While the evolution of Downtown Disney began in 2018, we recently began work on the latest transformation to introduce more innovative shopping, dining and entertainment experiences. Drawing inspiration from Southern California mid-century modern architecture, the west-end area will be a beautiful blend of vibrant color palettes, design elements and patterns influenced by the region, and will include an open lawn for relaxation and future events, and an even broader and diverse collection of dining and shopping.

We are investing significantly in Downtown Disney District to continue growing a dynamic, exciting destination with something for everyone. We also are intentionally diversifying our offerings to meet the needs of today’s guests, and have an exciting example of that to share with you today.

The world-renowned restaurant Din Tai Fung will join the district to offer guests their soup dumplings hand crafted right on site! This family-run restaurant will bring flavorful Chinese cuisine to Downtown Disney, where guests can enjoy dishes served family style in a creative space near our new lawn pavilion.

Michelin-starred Chef Carlos Gaytan will bring his inclusive vision of Mexican cuisine to Paseo and Centrico in the locations currently occupied by Catal & Uva Bar, brought to life by Patina Restaurant Group. The restaurant and central courtyard bar and dining area will offer guests a multi-sensory journey to the heart of Chef Gaytan’s homeland.

We are also working with Ralph Brennan’s Jazz Kitchen to finalize an evolution that incorporates vibrant California energy and a fresh approach to the menu, while staying true to the heart of New Orleans for this guest-favorite location.

Even more exciting news – fan favorite Earl of Sandwich will also pop into the district in a special sandwich walk-up location, offering guests the classics they know and love for a limited time beginning later this year.
Zum Vergrößern anklicken....