2012 - New Attraction - Rumor - (7/5/11) Rumor has it that Cedar Point may be playing with the idea of installing the Dinosaurs Alive walk-around upcharge attraction currently at Kings Island at The Point for 2012, and could be looking at using the Haunt pathway out on Millennium Island for it. While they may be thinking about this, I’ve got to think that they know that part of their market will have already seen it at Kings Island in 2011 and wont be interested in the slightest by moving it a few hours to the North. Then again… that didn’t stop them from putting in Windseekers at both locations this year either, did it?

2013 - New Coaster - Rumor - (7/7/11) While it’s still a bit far out to say anything for sure, we’ve heard from a new source that the rumored 2013 coaster project for The Point will see B&M come back to the park at last with a new project. It’s hard to say exactly what it may be, so I suspect it could be one of the new Wing Coasters, though a Floorless with a ton of inversions or even a Dive Machine would also be a good fit. A location near the front of the park on the Disaster Transport / Space Spiral side was also mentioned.
(7/5/11) If your hoping for a new coaster at Cedar Point in 2012, I’m told you will probably have to wait for 2013. No word on just what it will be, but usually Cedar Point doesn’t disappoint, so it should be good.
Zum Vergrößern anklicken....

Before you start reading what you are about to read. Please remember this is a rumor and NOTHING has been confirmed. However, the source who provided this information has worked with Cedar Point for 9 years and seemed very confident while discussing this future addition...

Of course after hearing this rumor we asked ride operators and attendants and majority of them seemed to dance around the same story.

So here it goes, Cedar Point is rumored to install 2 new coasters for the 2012 season.

Take a minute get yourself back in order and before you shoot it down, here are some things we thought of...

Why haven't there been any signs of construction?
If you know about the coaster wars, Cedar Point and Six Flags Magic Mountain are in an all out brawl for the Coaster Capital Title. With SFMM rumored to remove Deja Vu it would tie Cedar Point and SFMM at 17 each. Therefore, if the rumor of SFMM is true, Cedar Point doesn't want SFMM to find out to make any last minute plans like Green Lantern.

Where would they put them?
Well for years now we have been hearing Disaster Transport would be coming out to make way for something new. This could very well be true. Infact it could definitely happen, if SFMM were to take out Deja Vu it would bring their coaster count to 17. Cedar Point would then take out Disaster Transport bringing their total to 16. With the rumored two coasters it would bring the total to 18 beating SFMM.

That would be where the first would go. The second is rumored to be placed near the Paddleboat Excursion attraction which is also rumored to come out.

What type of coasters?
As we all know Cedar Point is running out of room for new BIG roller coasters. However, there are many types of coasters which can be very compact in its size. These include, Intamin Halfpipe, Intamin ZacSpin, GCI Wooden, Euro-Fighter or Dive Machine.

When would construction start?
Construction would start during their Halloween event and if Disaster Transport does come out the haunted maze taking place inside would be moved somewhere else or scrapped for the 2011 HalloWeekends Event.

So after putting this all into consideration, we could definitely see this happening.

The next rumor our source mentioned is a little on the outrageous side, ok actually REALLY outrageous.

Over the next 10 years a new roller coaster will be built each year giving the park a total of 28 or 29 coasters depending on what and if anything is removed.

I immediately shot this rumor down and I still do. I asked our source where they hell would they put all of these roller coasters. Well apparently the plan is to expand the peninsula out farther into Lake Erie on all sides to allow future expansion.

I want to believe this as it would be AMAZING if this were to happen over the next 10 years. I mean Dubai has built man made islands in the shape of palm trees so why can't Cedar Point expand out into the lake. Which would ultimately have to be done in order to build up.

So I leave it to you to speculate...
Zum Vergrößern anklicken....

In just one week, the wait is over! Check back here for 2012 news!
Zum Vergrößern anklicken.... 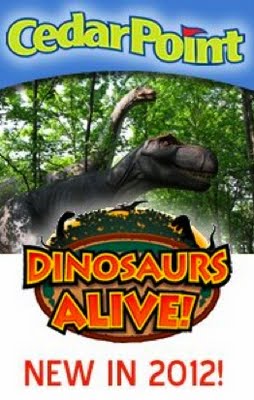 Next summer will see the debut of a rare highly-themed attraction: Dinosaurs Alive! on Adventure Island, located on the large wooded island that's currently encircled by Paddlewheel Excursions. According to the park's press release, over 50 handcrafted life-size animatronic dinosaurs will roar and move. Four of the dinosaurs will have interactive consoles that will allow guests to guide their movement, and the largest will be the Ruyangosaurus at 40 feet tall and 72 feet long.


An excavation site and paleontological dig will round out the new area's offerings. Dinosaurs Alive! will be an entertaining educational tool, as there will be informational signs for each exhibit, as well as guides and fossil displays.


Soak City will also be adding a new mat-racer slide complex, after many years without a major new attraction in the waterpark. More details to follow on this addition.
Zum Vergrößern anklicken....