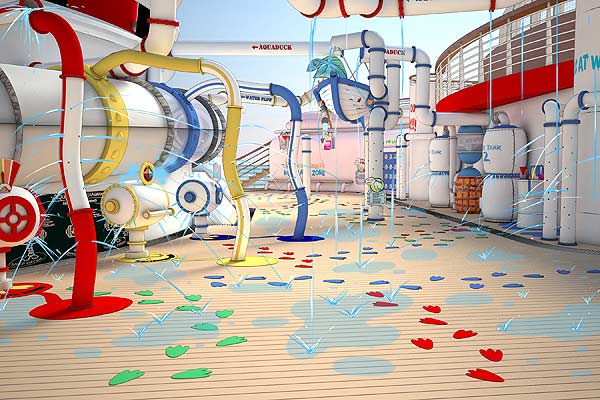 Disney Cruise Line said the feature unique to the Disney Fantasy will have a back story involving Donald Duck's nephews.

Disney Cruise Line today announced details on some of the new features that will apear on the upper decks of the new Disney Fantasy.

At the top of the list is the AquaLab, a water playgrond on Deck 12 that will be near the signature AquaDuck water coaster, also a feature aboard the Fantasy's sister ship, the Disney Dream.

The AquaLab will sport jets, geysers and bubblers in an 1,800-square-foot space with a backstory featuring Donald Duck's nephews, Huey, Dewey and Louie performing water experiments that end up getting the whole family soaked. Disney Fantasy guests will be left in charge as the nephews are away, but left with instructions to "control" the speed and water temperature of the AquaDuck by turning wheels and moving levers.

New in the "just-for-adults" category, the Fantasy will offer the Satellite Sun Deck, on deck 13 forward in addition to the existing Quiet Cove Pool and Cove Bar. Central to the deck will be Satellite Falls, described as a circular splash pool with benches and a gently falling rain curtain that provides cool comfort. In some ways, it looks like one of those mushroom waterfalls that kids love, but this one is for foiks 18 and over, and instead of a mushroom, it looks like one of those National Weather Service doppler radar stations, or the top of a chess board pawn figurine.

"There's kind of a tongue-in-cheek reference to it being called Satelltie Falls," said cruise line spokesman Jason Lasecki. "It's right under one of the satellites for the ship."

So that's what's new on the Fantasy, but the ship will still feature many of the signature activities of the Dream including the AquaDuck, an array of swimming pools, a giant 30-foot-wide LED screen, Nemo's Reef children's water play area, the adults-only Quiet Cove Pool and Cove Bar, nine-hold mini-golf course and an interactive sports deck.

Over the weekend, the 265-ton portion of the ship's bow was mated with the rest of the vessel, making one complete shape at the . Now more work will continue on the interior of the vessel before eventual sea trials and its . The Port Canaveral-bound ship is slated to make its Florida debut in April 2012 after is maiden voyage on March 31.

The Disney Fantasy, currently under construction at the Meyer Werft shipyard in Papenburg, Germany is set for its debut voyage on March 31, 2011. The Fantasy will sail out of Port Canaveral, offering alternating seven-night cruises to the Eastern and Western Caribbean with stops at Castaway Cay, the line's private island in the Bahamas. The 4,000-passenger ship is a sister to the Disney Dream, also based at Port Canaveral, that debuted in January 2010 and will up the Disney Cruise Line fleet to four, with the line's two original vessels, the Disney Magic and Disney Wonder.

The Wonder is currently based on the Pacific Coast and the Magic will continue to sail out of Port Canavearl until Fantasy's arrival, when it will migrate to New York.
Zum Vergrößern anklicken....

Ready for Paradise? All Aboard the Disney Fantasy!

Sail into the sunset this spring as Disney Cruise Line unveils its latest pièce de résistance – Disney Fantasy. The brand-new ship makes its maiden voyage on March 31, 2012, sailing from Port Canaveral to various Caribbean ports that include St. Maarten, St. Thomas, Grand Cayman, Costa Maya, and Cozumel, depending on the itinerary. (All cruises include a stop at Disney's Castaway Cay.) Several years in the making, Disney Fantasy takes family cruise vacations to the ultimate level of magic and majesty.

Like its sister ship, the Disney Dream, the 14-deck, 128,000-ton Disney Fantasy was constructed at the renowned Meyer-Werft Shipyard in Papenburg, Germany, where seven generations have lovingly built the world's greatest ships. But the attention to detail is pure Disney. Imagineer Joe Lanzisero, Senior Vice President Creative, gave us the inside scoop.

"We wanted to make a first impression that lets Guests know they're in for some special surprises. To give Disney Fantasy its own identity, Art Nouveau elements were incorporated into the ship's visual look. The atrium welcomes Guests with a beautiful peacock motif (popular in Art Nouveau) and golden statue of Mademoiselle Minnie Mouse, who's ready for her big night out."

At first glance, many of the spaces aboard the Disney Fantasy remain somewhat similar to the Disney Dream – but a closer look reveals subtle but distinctive changes. Deck 3's elegant Royal Court restaurant sits directly behind Minnie and provides an overall feeling of dining in the grand banquet hall of an imperial castle. "Inspired by Cinderella, Snow White, Sleeping Beauty, and Belle, the iconic glass slippers, roses, and tiaras are integrated throughout, but architecturally the space is different than the Royal Palace on Disney Dream. One of the primary design features are gorgeous sweeping columns topped by illuminated floral sprays. Another is the artwork – Italian artisans used 200,000 tiles to create mosaics of the princesses. They're absolutely stunning. Like other things, it'll be kind of the same – only new," says Joe.

Some experiences truly unique to the Disney Fantasy include Aqua Lab, an interactive water-play area (adjacent to the AquaDuck water coaster) where kids can explore the wet 'n' wacky experiments of Donald's nephews, Huey, Dewie, and Louie. The all-new Satellite Sundeck (with Satellite Falls) and wading pool on Deck 12 give Guests more water features and sunbathing options to enjoy outside. Imagineers upped the ante by creating proprietary software that allows diners at the Animator's Palate restaurant to watch characters they've drawn come to life via the magic of Disney animation. Updated Enchanted Artwork corresponds with a new, adult-friendly adventure game that allows the entire family to help Mickey and pals solve a mysterious case.

While the teen and childrens' spaces are similar to those onboard the Disney Dream, grown-ups will discover lots of intriguing new places to play. "The adult area takes on a whole new look and includes a variety of clubs. We thought it would fun to make your way around Europe by traveling to Italy, Ireland, Paris, and London all in one night ... you don't even need a passport!"

Joe describes the clubs, starting with La Piazza, an Italian-style piazza featuring a jewel-encrusted carousel that's actually the bar. "It feels like an Italian courtyard – there's even a Vespa for Guests to "tour" around on! Next stop is O'Gills, the Disney Fantasy take on an Irish pub. Like 687 on Disney Dream, this is the sportsbar area of the ship. Fans can watch televised games in a sleek environment that has one foot in the past and one in the present."

Skyline Bar (introduced on the Disney Dream) has been reprised based on Guest response. "It's back in expanded form, only now we're visiting European cities. Every 15 minutes, a new panoramic scene whisks Guests through Paris, London, Barcelona, Athens, or St. Petersburg via the club's 'skyline windows' (large video screens featuring live city views). Signature mixed drinks and music tracks change from city to city as well." Ooh La La, an all-new adult champagne bar, is imbued with a sexy, Parisian-boudoir vibe. "The furniture and lighting are very tongue-in-cheek." Top off the night at The Tube, a high-energy dance club inspired by the 1960s London Underground. Joe adds, "The sum total of all these experiences is a night out in Europe – without the jet lag!"

Usually Meyer-Werft builds a ship and entertainment is added after. With Disney Cruise Line it's the other way around ... they're building a ship around the entertainment. "It's an incredible collaborative process. Imagineering has 140 different disciplines – I love seeing the artists, designers, and writers rallying to come up with great ideas. Then add in all the artisans, international vendors, and the shipyard's passion for building ships. The excitement and dynamics of all these teams working together is unlike anything I've ever done in my entire Disney career," remarks Joe.

Can't wait to book your Disney Fantasy cruise? Enter the "Family Fantasy Cruise Sweepstakes" from October 31 through December 31 for your chance to win a three-night sailing aboard the all-new Disney Fantasy!
Zum Vergrößern anklicken.... 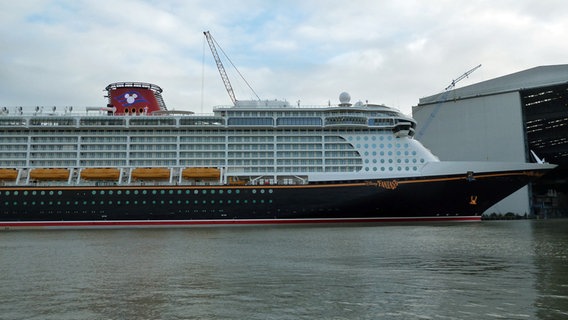 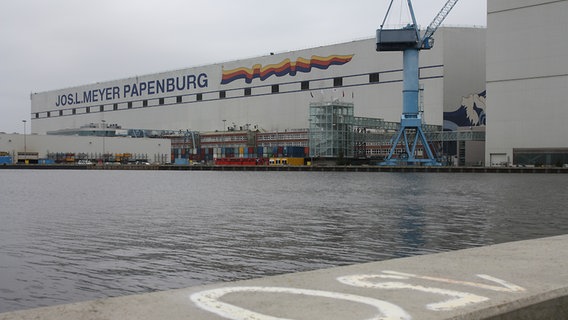 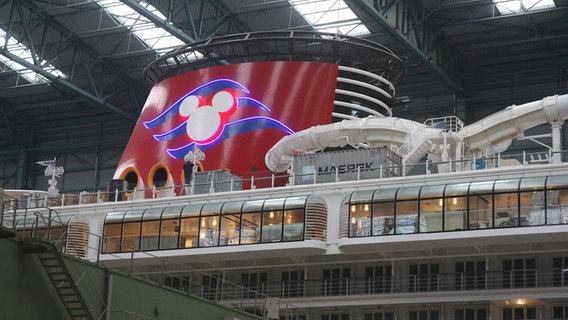 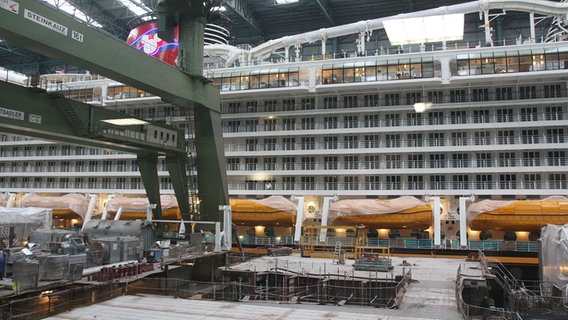 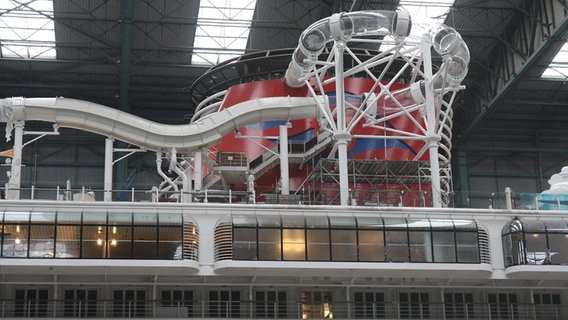 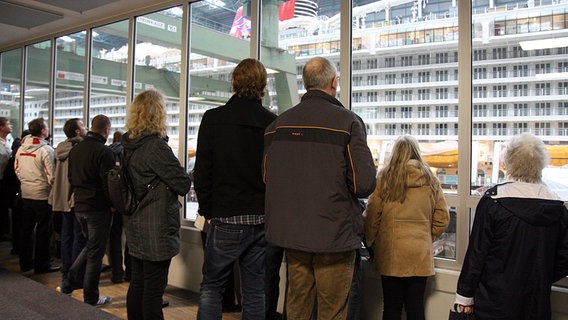 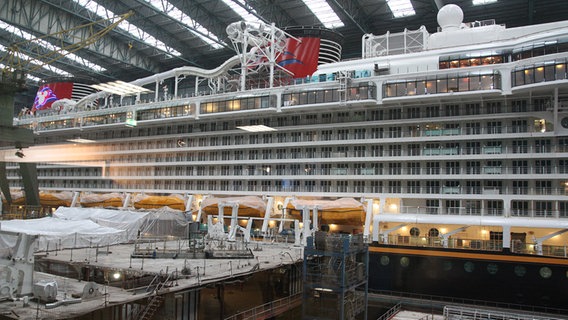 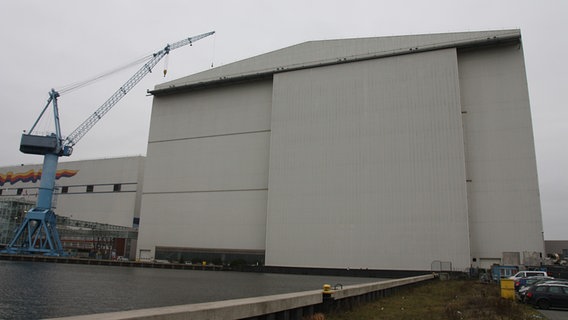 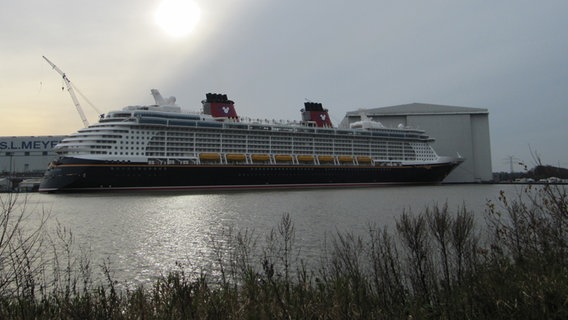 After traveling nearly 3,800 miles across the Atlantic from Germany, the Disney Fantasy made her grand arrival to America today. I can’t think of anyone better to welcome this new ship to the United States than Lady Liberty herself. 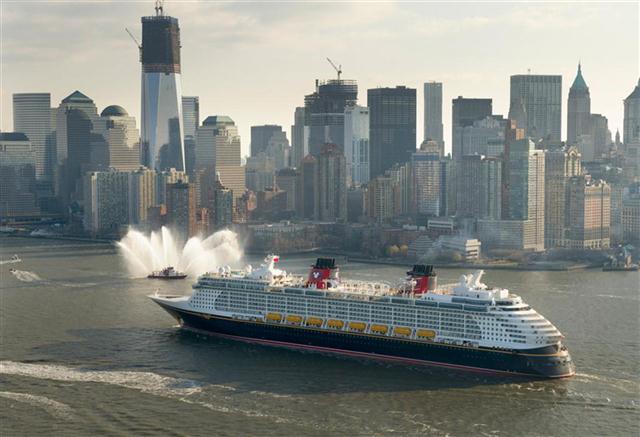 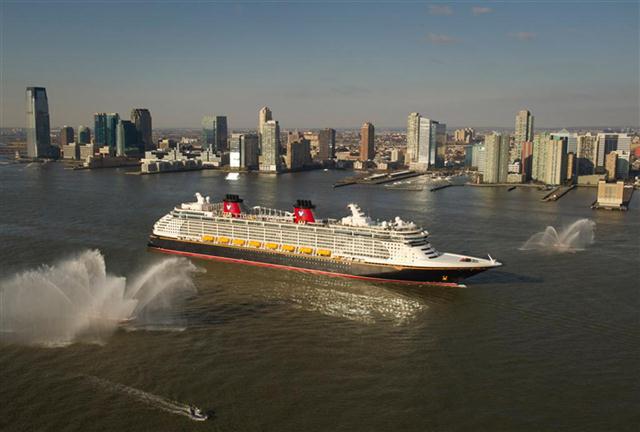 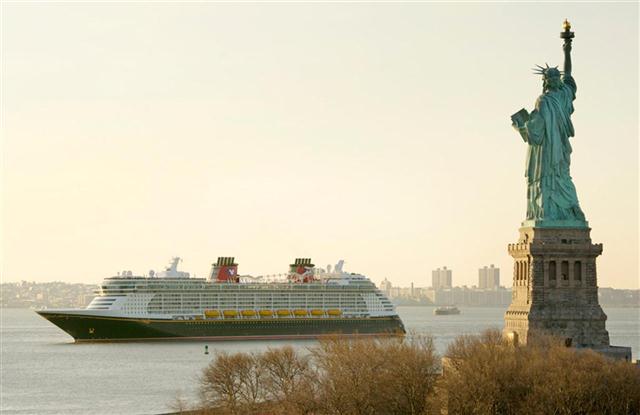 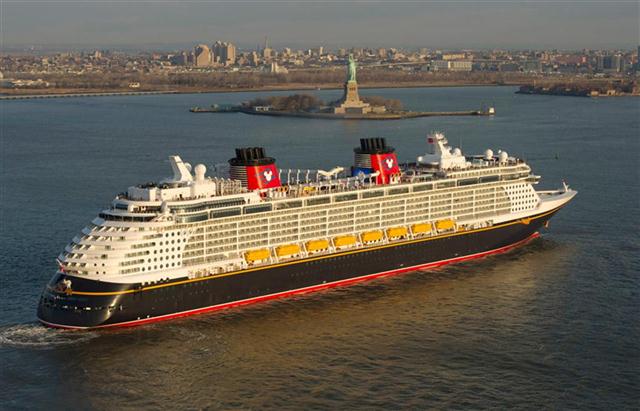 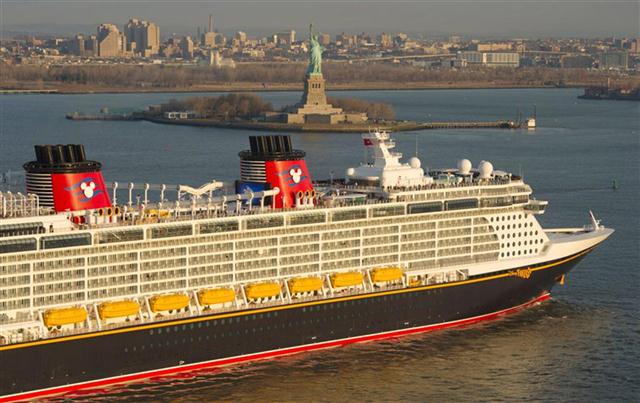 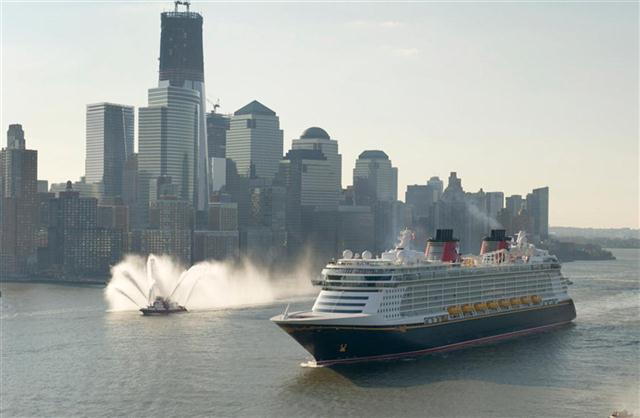 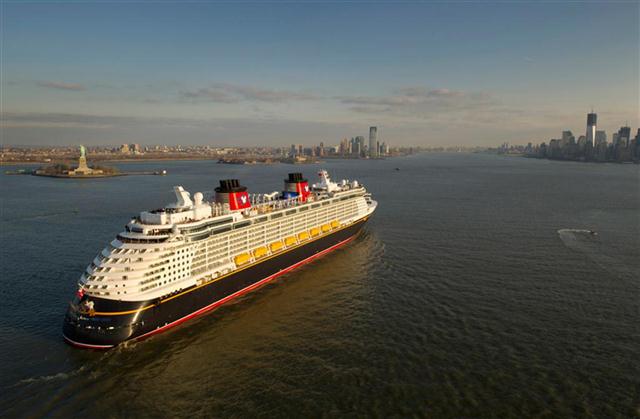 ​
While in New York City, the Disney Fantasy will be christened before sailing to her home in Port Canaveral, Fla., for a March 31 maiden voyage.

The Disney Fantasy is the first Disney Cruise Line ship to visit New York City, making her arrival today even more magical. But the excitement in the Big Apple doesn’t stop here. In May, the Disney Magic arrives for a season of summer cruises from Manhattan.

Here’s a glimpse of the Disney Fantasy sailing down the Hudson River as New Yorkers welcome her with open arms. It’s a sight I’ll remember forever!
Zum Vergrößern anklicken....